1935: First Shortwave outlets to North and South America via transmitters of the League of Nations, known as the “Voelkerbund”, operated by the Radio Suisse Co. in Prangins, near Geneva.

The curtain array at Schwarzenburg

1937: Weekly outlets in the three Swiss national languages, and features such as the “Week in Switzerland”, spoken correspondence, sports results etc. These transmissions took on so well that construction of an own transmitting centre was considered. The Swiss PTT was given then mandate to evaluate a suitable location. As a result, a wide plane near Schwarzenburg was chosen.

1938: The Swiss Parliament agreed to the project and shortly after, construction started.

1939:     Early spring, the station was completed, but on July 6, the station was destroyed by a big fire, allegedly due to a human shortcoming. Prangins took over helpfully the transmissions again, while reconstruction of the Schwarzenburg site began immediately and was even extended to contain additional transmitters for overseas radiotelephony, which became an important item, due to the aggravating political situation in Europe: WW-II was about to break out.

Early construction at Schwarzenburg in 1938

1939/1940:     Just about three months after its outbreak the Schwarzenburg transmitting site was rebuilt and became operational with two 25 Kilowatt AM Hasler transmitters and a few rotating Rhombic Antennas. At the same time, Radiotelephone Terminal Equipment was installed in the Main Post Office in Bern, where the technical and switchboard operators were about to connect telephone customers over the SW transmitters to various destinations, such as New York and Lisbon.

Bob Zanotti with an earlier transmitter at the Schwarzenburg “museum”. The station and its close-doors museum was shut down on March 29, 1998.

Swiss borders becoming blocked by the Nazi occupation of Europe, the Swiss had to build up their overseas supply using their merchant fleet with the main unloading harbours in Lisbon and Genoa. To avoid being torpedoed by German submarines, the ships positions were broadcasted daily via Schwarzenburg and picked up also by the German Marine HQ, so the Germans knew exactly where the neutral Swiss ships were. The ships themselves were in wireless contact via special services operated by the Radio Suisse Co. in Duebendorf near Zurich.

Using Radio amateur equipment: The construction of new additional transmitters was rather slow, Kurt Wydler, one of the first technicians of the station, a radio amateur (HB9DS) has just finished his Amateur-transmitter, but with the outbreak of the War, all Radio amateur equipment was confiscated by the PTT. Wydler’s transmitter, however, was sent back to Schwarzenburg, where a final 500 Watt amplifier was built and added – and was put into continuous operation for broadcasting.

1941: A 2.5 kW Western-Electric SSB transmitter was installed, by the way, that was the first SSB equipment in Switzerland, and at the Radio terminal in Bern also WE-Terminals and a special 5-band Speech- privacy to scramble the telephone communications were put into service. This was the beginning of an SSB-link between Switzerland and the US. The transmitting site was in Lawrenceville and the receiving station at Whiteplains, NY.

1946: After the War, continental communication saw a tremendous boom, which called for additional Equipment. Ten standard, 4-kW transmitters were installed, plus a 40 kW final amplifier.

The 25 kW AM transmitters at Schwarzenburg

1952: In addition to the Rhombic antennas, a new curtain-antenna-array was built and fed with almost one kilometre long 300 Ohm parallel feeder lines.

1960: The huge rotatable Swedish Allgon log-periodic antenna was built, which could carry 250 kW. also new matching the 250 kW BBC and Marconi transmitters joined the Hasier Equipment and shortly after, quite some 30 kW Siemens- SSB-transmitters were added. These Siemens were exclusively for the Radiotelephony service.

The Sixties also saw half a dozen new 40 kW rotating log-period antennas to provide the fast-evolving radiotelephone service which included some 30 circuits to stations all around the world, some of them using the new Lincompex technique which improved the speech quality a lot, and which also allowed direct dialling.

So the Schwarzenburg transmitter served several purposes: broadcasting, radiotelephony and in:

1971: still a new Service was introduced: BERNA-RADIO, to provide wireless communication with air crafts aloft. Starting out with our national Airline Swissair, soon after many national, European and international airlines joined this practical instrument, to keep in touch with their home bases for all kind of communication. It proved quite handy when an aircraft had troubles of any kind so that the flight engineer could get immediate assistance from the company trouble-shooter. For this service, two new, fast switching and remote controllable 10 kW Siemens transmitters were added (these transmitters were later acquired by NEXUS-IBA and used to start IRRS-Shortwave’s European service). 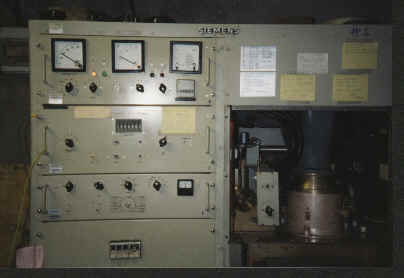 NEXUS-IBA’s TX #1, one of the twin Siemens transmitters later modified for A3A, reduced carrier USB, and in operation since 1987 from IRRS-Shortwave’s facility in Milano, Italy, serving Europe, N. Africa and the Middle East. These fully automatic, fast switching transmitters were used by Berna Radio’s aeronautical service at Schwarzenburg to connect Swissair’s aircrafts flying all over the world to their company headquarters in Switzerland. NEXUS-IBA acquired them when IRRS-Shortwave started its transmissions in October 1987.

It is sad news indeed to report that this aeronautical service of Berna-Radio will also come to an end sometime in 1998, as aircraft communication has been veered to satellites, which provide 24 hours access, whereas HF Communications – as we all know, are subject to propagation conditions and occasional freaks. 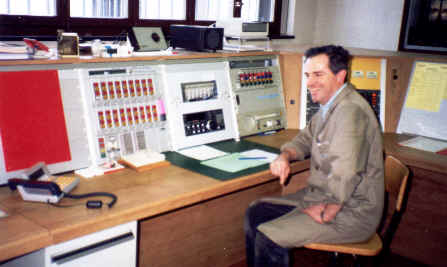 Paul Stettler at control board in Schwarzenburg

It is indeed with some sadness and nostalgia, that we have to accept the closure of the legendary Schwarzenburg transmitting station, but all those having taken part from the very beginning it up and kept it running for almost sixty years can certainly look back to a most interesting era with the sure feeling, having accomplished a most rewarding task, and a job was well done, that’s for sure!

But nothing lasts forever. So we do have to accept the new age in which Shortwave broadcasting will – still for many years – be very much in evidence, and so will Swiss Radio International! The 500 kW transmitting station near Sottens in the French part of Switzerland will continue operation. The Schwarzenburg frequencies will be aired from stations in Juelich, Germany, and relay-stations in Africa, South America and the Far East.

The European outlet of 6165 kHz still in Lenk, in the Bernese Oberland, will also come to an end sometime in 1988, and that frequency will also most likely continue to be heard from a Juelich transmitter – i.e. from one of the Deutsche Welle’s transmitting sites. SRI will most likely also be heard Internet in the future, and can be picked up from satellites as well as on many cable systems.

So much from the history of the Shortwave transmitting site in Schwarzenburg.